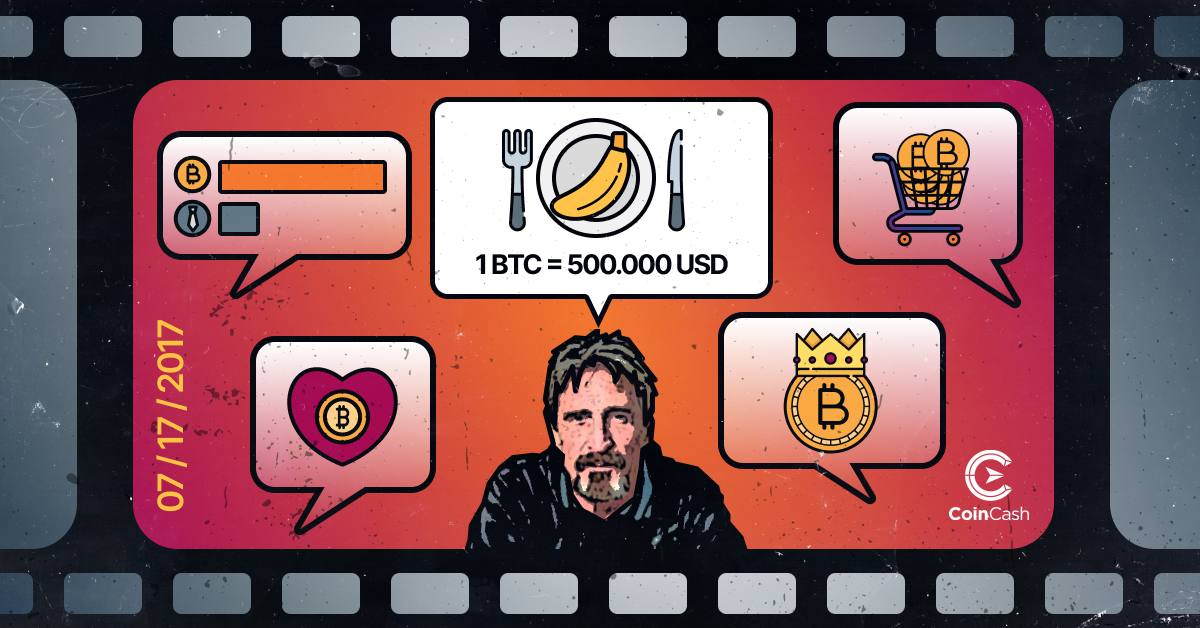 On 17 July 2017, John McAfee, known for his scandals and the first commercially available antivirus, announced on Twitter that BTC would be worth $500,000 within three years. He put the icing on the cake by adding that if it didn't work out, he promised to eat his own genitals on live TV. That's a pretty strong statement, and words have been hard to come by ever since.

Bitcoin sadly didn’t hit $500,000, and McAfee later tweeted he was not going to not do what he said, as it was all a "ruse" to boost Bitcoin’s value. Later, in 2019, he claimed it was "mathematically impossible" for Bitcoin to be worth less than $1 million by the end of December 2020. He also asked his followers to "brush up their math skills and run some f*^#$ng numbers”. We were waiting for the moment, but it never came. However, the prices had a superior time and another bull market started at the end of the year.

If Bitcoin has anything to be proud of, it's the hilarious comments and Twitter posts about it. Back in 2020, Peter Schiff created an online poll and asked his followers to vote on whose decision they would accept: an experienced professional or a “kid”, who had just bought Bitcoin. The result was priceless, as Schiff lost the pool 18 to 81 percent!

Creativity knows no bounds - especially when it comes to Elon Musk. His tweets about Dogecoin deserve a photo album, but his commitment to Bitcoin is neither something we can sweep under the carpet!

For the father of Tesla, "Bitcoin means security"; according to Michael Saylor, CEO of MicroStrategy, Bitcoin is about to stay; and the Winklevoss brothers have bet their lives on cryptocurrency. But American stars, singers, and rappers like Snoop Dogg and Kanye West also share the same view that cryptos are amazing. In fact, we don't have to go far to hear a word in support of Bitcoin. Balázs Sebestyén, the host of Radio 1, has been involved in cryptocurrencies since 2013 and has worshiped Bitcoin in almost all his broadcasts.

As you can see from the above, cryptocurrencies are loved, almost excessively so, and we hope that this number will continue to grow!